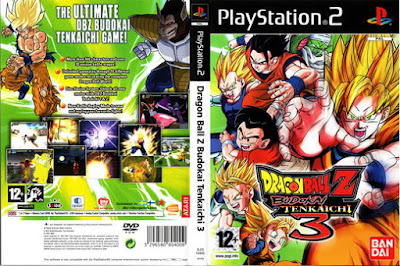 Dragon Ball Z Budokai Tenkaichi 3 . It has 97 characters (161 with transformations), the largest list of characters in any Dragon Ball Z game, as well as one of the largest in any fighting game.
The game modes are:
Dragon Story: It is the story mode of the game and gives us the opportunity to fight in the most memorable battles of DB, DBZ, DBGT and the 13 DBZ movies.
Ultimate Battle: This mode has 3 types of game:
- SIM Dragon: You can choose a character (only in normal mode, not custom) and train or decannize before the battles that are coming day by day.
- 100 Missions: Choose one or more fighters to fight fixed enemies in a difficulty that will gradually increase as you approach the 100 battle missions in this way.
- Survival: Choose your favorite character (personalized if you like) to face a tough battle against many enemies with no chance to recover your life during these encounters. 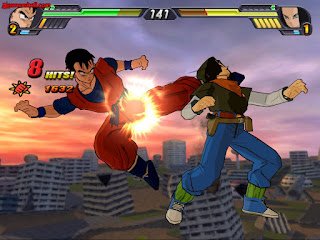 World Dragon Tour: The well-known martial arts tournament, this time with more types of tournaments they are in; The World Tournament.
The Great World Tournament, the Cell Games, the Other World Tournament and the Yamcha Games.
Duel: In this mode of the game you can participate using the characters you have unlocked along the journey or the characters you had at the beginning in this mode is different forms of fight that are: battle (1vs1), team (1-5Vs1- 5) & DP (battles of few characters with high level or vicersa).
What's new in this version made by fans?
1 - All the characters with voices in Latin.
2 - Music True to the series and respective sagas.
3 - Subs in Spanish (not main menu).
4 - Story Mode with all the sagas in Latin + subs.
5 - Menus with voices in Latin * All *.
6 - Opening AMV I will survive.
7 - Ending AMV * My enchanted heart *.
8 - New appearances (OPTIONAL) for some characters.