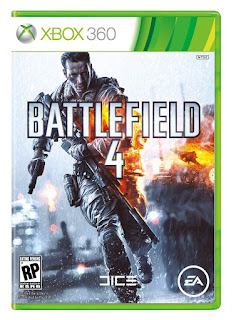 Battlefield 4 XBOX 360 Download the famous war action saga created by DICE and EA launches new delivery. The responsible study is committed to reaffirm the pillars of the franchise, and to continue expanding them with a new campaign set in a credible conflict with the East, and by the strength of a legend cooperative.
The development between the current generation and the next guarantees a graphic and technological infarction section.
Battlefield 4 ™ comes to Xbox360 with DICE's exclusive Frostbite ™ 3 engine technology. The line between game and glory is blurred in Battlefield 4. With its environments of dynamic destruction, vehicle combat and the chaos of total war.
Battlefield 4 is going to be one of the most impressive Xbox 360 experiences. its distinctive multiplayer mode.
Battlefield 4 ™ includes an intense and dramatic character-centered campaign that begins with the evacuation of important American personalities from Shanghai and follows the efforts of your platoon to get back home.
There is nothing like it. Immerse yourself in the glorious chaos of total war, as you can only find in Battlefield. 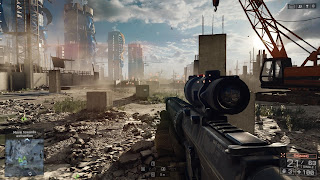 MAIN FEATURES:
* Only with Battlefield you can know Levolution on Xbox 360 and you will change the landscape in real time with interactive environments that react to each of your movements, so that there will not be two equal games.
* Only in Battlefield you can enjoy the impressive power of the new generation Frostbite ™ 3 engine that provides unparalleled sound and visual fidelity, superior character animation and very dynamic destruction.
* Only in Battlefiled can you live the most raw war with the freedom to play to the limit and trace your own path to victory.
* Only in Battlefield you can dominate sea, land and air with a new and intense battle of vehicles in the water on Xbox 360.
* Only Battlefield allows you to direct your patrol thanks to the Commander mode, with which you will be at the forefront to change the battle tables from the comfort of your seat or on the go with a tablet
Platform:  XBOX 360
Region:  NTSC-U / PAL
Release:  iMARS
Requires Firm LT + 2.0 or LT + 3.0  (REQUIRES Patch for LT + 2.0 and For LT + 3.0 NO : D)
Language : Multilanguage Voices and Texts In  SPANISH CASTELLANO  (100% Proven), ENGLISH, FRENCH, GERMAN, ITALIAN, PORTUGUES DO BRAZIL
Size:  17,12 GB - 2 DVD9 - ISO - XGD3
Size RGH: -
NOTE 1: YOU NEEDLY REQUIRE 2 GB OF FREE SPACE ON THE XBOX 360 HARD DRIVE TO PLAY BATTLEFIELD 4, IT CAN NOT BE INSTALLED ON USB PENDRIVES OR 4 GB SLIM CONSOLES
Note 2: The first time you start the game, regardless of the disk you use, you will be asked to perform a necessary installation of 2 GB of content on the hard drive, (DO NOT USE XBOX 360 SLIM 4 GB), if you insert the DVD 2 (Game) at the time of starting the game will ask you to insert the DVD 1 (Multiplayer) to install the mandatory content, so it will be necessary to download both discs, as with many Xbox 360 titles, in addition to the required installation Each disk can be installed on the hard drive to minimize access to the game disc and improve loading times. DVD 1 contains only the multiplayer mode and installable content MANDATORY and DVD 2 contains the story mode or individual campaign
Note 3: To play if you do not have hard drive in the console, you must get a 4 or 8 GB pendrive insert it in the console and format it from options and configuration, then in the pc with the program horizon drag the content folder located inside the dvd 1 or separately (links at the end of the post) and release it inside the program window, then start the game with the DVD 2 and with the pendrive entered in the console and you should be able to play , if you have RGH you can copy the content folder to the root of your hard drive of your console so you can connect your console to the PC through FTP and use some FTP client as filezilla to transfer files, as if for some reason you do not load the game from the DVD 2 even after doing the above mentioned, try to load the campaign from the DVD 1